Tarique Rahman was born on 20th November 1965. His life is integrated
with the origin, inception and emergence of Bangladesh as an independent
state. He is the eldest son of Shaheed (Martyred) President Ziaur Rahman,
the decorated hero of the liberation war of Bangladesh, who proclaimed the
country’s independence, formed the Bangladesh Nationalist Party (BNP), and
established the multiparty parliamentary democracy in the country. Tarique’s
mother Begum Khaleda Zia, the current Chairperson of the BNP, was elected
as the Prime Minister for record three times. Tarique has a younger brother
named Arafat Rahman. Tarique is married to Dr Zubaida Rahman, daughter
of Late Rear Admiral Mahbub Ali Khan, who was the Chief of Staff of the
Bangladesh Navy and also served as the Minister of Telecommunications and
Minister of Agriculture in subsequent governments. Zubaida Rahman is a
qualified cardiologist by training and studied at Dhaka Medical College, the
premier medical college of Bangladesh. Tarique and Zubaida were married on
3rd February 1994, and they have a daughter named Zaima Zarnaz Rahman.
When Tarique Rahman grew up to go to school, he was admitted to
a school in Dhaka popularly known as Shaheen High School and College,
primarily meant for the children of the Army personnel. Having passed the
Secondary School Certificate (SSC) and Higher Secondary Certificate (HSC)
examinations with commanding results, Tarique entered the University of
Dhaka as a student of International Relations, a subject of his choice. While
in the University, he read political thoughts of Socrates, Plato, Aristotle,
Hobbes, Locke, Roussou, Voltaire, Karl Marx and other exceptional thinkers.
He concentrated more on socio-economic and political subjects, including the
in-depth study of the gradual development of democracy and the dynamics
of economic liberalisation. Tarique graduated in a volatile situation at the
height of the nationwide movement against the autocratic regime of Hussain
Muhammad Ershad, which his mother Begum Khaleda Zia was leading.
Upon completion of studies, Tarique became a successful entrepreneur
and established several businesses, particularly in the textile and agro-based
industries. 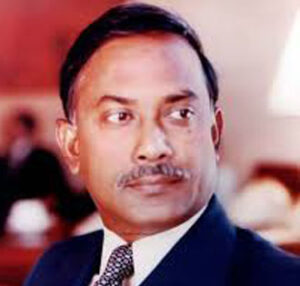 Shahid Ziaur Rahman, (1936-1981) was the President of Bangladesh, Chief of Army Staff, leading freedom fighter, who declared the Independence of Bangladesh. Ziaur Rahman was born on l9 January 1936 at Bagbari in Bogra. His father Mansur Rahman was a chemist working in a government department in Calcutta. His early childhood was spent partly in the rural area of Bogra and partly in Calcutta. After the partition of India (1947), when his father was transferred to Karachi, Zia had to leave the Hare School in Calcutta and became a student of the Academy School in Karachi. He completed his secondary education from that School in 1952. In 1953, he got himself admitted into the D.J. College in Karachi. In the same year he joined the Pakistan Military Academy at Kakul as an officer cadet.

Shahid Ziaur Rahman was commissioned in 1955 as a second lieutenant. He served there for two years, and in 1957, he was transferred to East Bengal Regiment. He also worked in the military intelligence department from 1959 to 1964. In the Indo-Pakistan War of 1965 he made his mark as a valiant fighter in the Khemkaran sector as the commander of a company, and incidentally, his company was one of those which were offered maximum gallantry awards for heroic performances in the war. He was appointed a professional instructor in the Pakistan Military Academy in 1966. In the same year he was sent to the Staff College in Quetta for attending a command course. In 1969, he joined the Second East Bengal Regiment as its second-in-command at Joydevpur. He was sent to West Germany for higher training. On his return home in 1970 Ziaur Rahman, then a major, was transferred to Eighth East Bengal Regiment at Chittagong as its second in command. 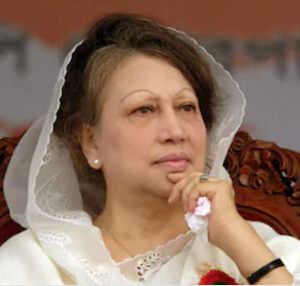 Begum Khaleda Zia is a Bangladeshi politician who was the Prime Minister of Bangladesh from 1991 to 1996 and again from 2001 to 2006. When she took office in 1991, she was the first woman in the country’s history and second in the Muslim world (after Benazir Bhutto of Pakistan in 1988–1990) to head a democratic government as prime minister. She is the chairperson and leader of Bangladesh Nationalist Party (BNP) which was founded by her late husband President Ziaur Rahman in late 1970s.

After a military coup in 1982, led by Army Chief General Hussain Muhammad Ershad, Khaleda Zia helped lead the continuing movement for democracy until the fall of military dictator Ershad in 1990. Khaleda became prime minister following the victory of the BNP in 1991 general election. She also served briefly in the short-lived government in 1996. Her party came to power again in 2001. She has been elected to five separate parliamentary constituencies in the general elections of 1991, 1996 and 2001.

Begum Khaleda Zia was born to father Iskandar Majumder, a businessman, and mother Taiyaba Majumder on August, 1945 Dinajpur District in north-western Bangladesh.[1] Khaleda Zia married Ziaur Rahman in 1960, an Army officer who became president in 1977, following the assassination of Sheikh Mujibur Rahman, the first prime minister of Bangladesh. He ruled until 1981, when he was assassinated in a military coup.

At the time, Zia and his family were living in a large house in the Dhaka Cantonment, which was first built as the residence of the Deputy Chief of Staff (DCS) of the Bangladesh Army. When Ziaur Rahman was appointed DCS Major General, he and his family moved there. After he became President of Bangladesh, he kept the house as his residence. Following his assassination in 1981, the Acting President Justice, Abdus Sattar, leased the house “for life” to Khaleda Zia, for ৳101. When the Army took over the government, Lieutenant General Hussain Mohammad Ershad, Army Chief of Bangladesh and Chief Martial Law Administrator, confirmed this arrangement in 1982. After the BNP came to power in democratic elections in 1991, it did not disturb the arrangement.

A neutral caretaker government in Bangladesh oversaw elections on 27 February 1991 that were broadly considered to be free, fair and truly democratic, following eight years of a military government.

The BNP won 140 seats, 11 short of a majority. As it was the only party capable of forming a government, Khaleda Zia was sworn in as the country’s first female prime minister on 20 March with the support of a majority of the deputies in parliament.

The acting president Shahabuddin Ahmed granted Khaleda Zia nearly all of the powers that were vested in the president at the time, effectively returning Bangladesh to a parliamentary system in September 1991. With a unanimous vote, Parliament passed the 12th amendment to the Constitution in 1991. The BNP-led government formally restored the parliamentary system.

Bangladesh Nationalist Party (BNP) won the 15 February 1996 election. It was a landslide victory for BNP in the sixth Jatiya Sangshad. But it was last long very few days since the other major parties demanded that a neutral caretaker government be appointed to oversee the elections. BNP responded to their demand. Then the short-lived parliament hastily introduced the Caretaker Government by passing the 13th amendment to the Constitution. The parliament was dissolved to pave the way for parliamentary elections within 90 days.

The BNP formed a four-party alliance on 6 January 1999 to increase its chances to return to power in the next general elections. These included its former political foe the Jatiya Party, founded by President Ershad after he led a military government, and the Islamic parties of Jamaat-e-Islami Bangladesh and the Islami Oikya Jot. It encouraged protests against the ruling Awami League.

The four-party alliance participated in the 1 October 2001 general elections, winning two-thirds of the seats in parliament and 46% of the vote (compared to the principal opposition party’s 40%). Khaleda Zia was sworn in as the Prime Minister of Bangladesh.

She worked on a 100-day program to fulfill most of her election pledges to the nation. During this term, the share of domestic resources in economic development efforts grew. Bangladesh began to attract a higher level of international investment for development of the country’s infrastructure, energy resources and businesses, including from the United States, Great Britain, and Japan. Restoration of law and order was an achievement during the period.

Saudi Arabia: Begum Khaleda Zia made some high-profile foreign visits in the later part of 2012. Invited to Saudi Arabia in August by the royal family, she met with the Saudi crown prince and defence minister Salman bin Abdulaziz Al Saud to talk about bilateral ties. She tried to promote better access for Bangladeshi migrant workers to the Saudi labour market, which was in decline at the time.

Talks in China related to trade and prospective Chinese investment in Bangladesh,particularly the issue of financing Padma Bridge. At the beginning of 2012, the World Bank, a major prospective financier, had withdrawn, accusing government ministers of graft.The BNP announced that the Chinese funding for a second Padma Bridge was confirmed during her visit.

Khaleda Zia’s India visit was considered notable as BNP had been considered to have been anti-India compared to its rival Awami League. At her meeting with Prime Minister Singh, Zia said her party wanted to work with India for mutual benefit, including the fight against extremism. Indian officials announced they had come to agreement with her to pursue a common geopolitical doctrine in the greater region to discourage terrorists.

On 24 May 2011, the New Jersey State Senate honored Begum Khaleda Zia as a “Fighter for Democracy”. It was the first time the state Senate had so honored any foreign leader and reflects the state’s increasing population of immigrants and descendants from South Asia.